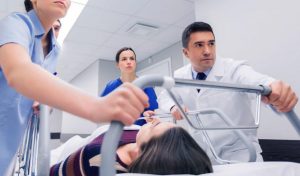 Did you ever wonder what happens when two moms whose sons suffered tragic accidents on a college campus meet? They join forces to bring about a national discussion that shines a spotlight on campus safety! I met Nanette Hausman a little over a month ago. It was evident just a few minutes into the conversation that I had found a kindred spirit.

Much like myself, a broken-hearted mother who started Rail Against the Danger after my son’s near-fatal loft bed fall, Nanette was driven to make real change. She locked arms with a close friend who lost her 19-year-old brother in a cycling accident near his college campus to launch the College911.net initiative. College911 was established to help others and honor Nanette’s son, Corey B. Hausman – a student at Colorado University-Boulder (CU) for only 15 days before a fall from his skateboard on a problem campus pathway.  Corey was sent to a local medical facility (not Trauma Level 1) and they could not save his life. Corey’s passing on September 12th was the 3rd CU student death since the fall term began on August 27th.

Part of Ms. Hausman’s efforts have included publishing a checklist for parents and students that spells out the rights and responsibilities involved in emergency medical care once a child turns 18. The checklist contains questions and suggestion for families to consider before dropping their student off to live on or near campus.  The Clery Act, enacted in 1990, requires campuses to publish crime data. However, accident data remains difficult to pin down because colleges and universities don’t want the inevitable negative publicity. We feel that parents and students have the right to any and all campus safety data before making the decision to stake their time and money into a college or university. For more on Corey’s story and College911.net, visit their website.

College911’s mission is to save the lives of college students and reduce the number of accidents on campuses.

In order to accomplish the mission, College911 believes transparency of critical information (student deaths/campus accidents) will lead to more informed student matriculation decisions and help their families be better prepared as medical emergencies arise. Once transparency is established colleges and universities will be incentivized to act more responsibility in caring for their students through 1) investment in infrastructure/safety programs and 2) establishing bridges to best possible emergency medical care.